A simple framework to think about business cycle macro

I think that my comparative advantage lies in curating and contextualising the insights of my intellectual superiors rather than coming up with new ones.  I like to believe that this is a useful skill in macroeconomics & monetary economics - where people tend to repeat, forget and and re-invent the same debates for a couple of hundred years, and where there is growing evidence that there really is very little new under the sun. The important stuff has probably already been said, debated, understood (and sadly, forgotten) multiple times over. However, there's still ample scope to organise and parse it in a relatively novel fashion.

To this end, I often find myself creating frameworks to organise things I read. The macro-cube still serves me well in organising the leading thinkers. Here's another framework - a much simpler one - to think about the leading theories of short and medium run, or business-cycle macro. 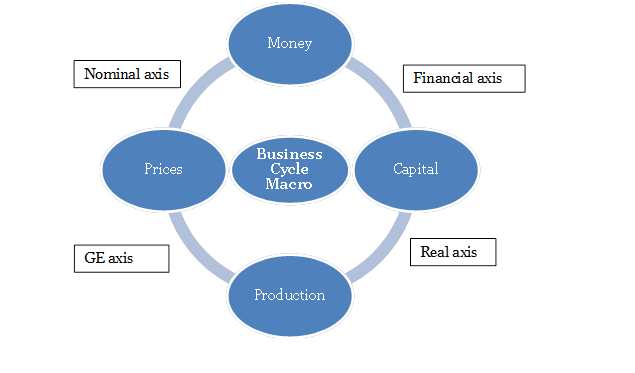 Money, Capital, Production, Prices. That's what business cycle macro is about. The money-capital connection is the 'financial axis' , roughly corresponding to the asset markets and the underlying real assets they represent claims to. The capital-production connection is the 'real axis', the connects the productive capacity of the economy with actual production (via, say, the Cobb-Douglas production function). The money-prices connection is the 'nominal axis', which explores the connection between the purely nominal variables in the economy, e.g. money and total spending, via, say the equation of exchange and QTM.  The production-prices connection connects the macroeconomy with the microeconomics of individual markets - the general equilibrium (GE), so to speak.

It's possible to organize a surprisingly wide array of macro thought along these lines. I will invoke this framework often enough in subsequent posts.
Posted by Ritwik at 1:37 am

Given the huge emphasis on employment outcomes, I'm curious where the labor market fits into the model. Should it have its own node? Or would you put it along the GE axis due to the importance of sticky wages and income feedback mechanisms?

Good question! I'd say somewhere under 'production' or 'capital'. I had the production node originally called Labour, actually, but I tend to take a very 'human capital' view of labour, and it's prices not just wages which are sticky. But yes, there's an obvious AS/Philips curve parallel between prices and production, in the aggregate.

(1) The prices axis makes me think back to reading about the Soviet depression of 1990-1991, which is the main example of hyperinflationary depression to my knowledge. If there is (a) a huge increase in the money supply and (b) most important prices stay fixed, what happens? I think that the Soviet experience of 1990-1991 goes some way to giving us an answer.

(2) This diagram (like all your diagrams) gets me thinking: what if economies are constituted by two different, simultaneous business cycles? So there is BOTH-

(i) Endogenous "real" * cycles that are determined by movements in aggregate technology, entreneurship, sentiment, inventories, demographics and other things that make up (the questionable and very unscientific) explanations of business cycles like the Juglar cycle & the Kitchin cycle.

Cycles of type (ii) are caused by monetary disequilibrium, cycles of type (i) are caused by equilibriating responses of economies to shocks. I think that the best response of type (ii) is to have a system where money adjusts in line with the demand to hold it or at the very least broad money growth is kept reasonably stable. On the other hand, type (i) cycles can be unpleasant but are best left alone, except for supply-side policies like education, retraining and a system of well defined & enforced property rights.

My main criticism of your graph is the use of the terms "capital" and "production" on the real side, because of its Ricardianism (even though you rightly acknowledge the importance of human capital). The real economy is not a matter of land + capital. Entrepreneurial discovery and distribution are more important to get right: the best productive process and equipment in the world is useless if no-one knows a way to use it.

Anyway, apart from the labelling of the real axis (and I have no doubt that you understand the points above better than I do; it's just a question of presentation) I love this graph.

* Though the financial system, price controls and other monetary/nominal factors may be involved.

I suspect you're ascribing to me positions I do not hold. :)

perhaps my use of the Cobb Douglas function, which is fundamentally Ricradian in nature, was a mistake. It's the most standard one out there, though, so I thought it deserved a mention if I was to only include one example.

Following Fischer Black (and hence Irving Fisher), as parsed by Perry Mehrling, I tend to include human capital as capital.

Following Hicks, I tend to regard capital as time, as the integrated production process itself (without invoking the needless Austrian notion of production period)

Following Minsky (and hence Keynes & Schumpeter) I believe that at least for business cycle macro, the 'real' economy is only as real as the financial or nominal claims and transactions in it.

Taken together, all this will tell you why capital and production can perhaps suffice for 'real' axis, and why the real axis does not suffice for business cycle macro.

But if I was to include all of this in the introductory post, I'd be running ahead of myself. :)

All good points, but I'm currently in that mood I get after reading the work of Schumpeter, Mises and Kirzner on entrepreneurship, where I want EVERYTHING to make some mention of the concept. ;)

Irrational, yes, but whoever said that human beings are always rational?