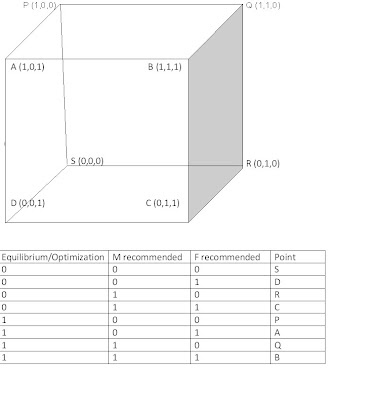 In the opening paragraph of his General Theory, Keynes distinguishes his theory from the Classical theory and says, "I shall argue that the postulates of the classical theory are applicable to a special case only and not to the general case...." He refers to that special case as "a limiting point."

When I read that, I picture a sine wave moving through time, with the "special case" fitting in at the cyclic peak. I picture a time-based, linear progression.

Your Rubik's cube -- Ritwik's Cube -- is anything but linear!

I have trouble combining your three-dimensional view with my one-dimensional understanding of Keynes' fourth-dimensional sequence of events. One cannot take Keynes out of your cube, certainly.

Maybe the "proper" geometric shape is tree-like, with lots of branches that end up going nowhere, and a main trunk that includes Keynes and his "classicals" ...But then one would have to re-envision your cube like Watson and Crick.

Certainly there is progress through time in economics. Beyond saying that all points on your cube are held concurrently, have you any idea how your cube would look as it evolves through history?

Thanks for the kind words! The cube is really only the state space - I have no time dimension, nor was I concerned with it. Economic theory may evolve along a curve that can take any value on the state space.